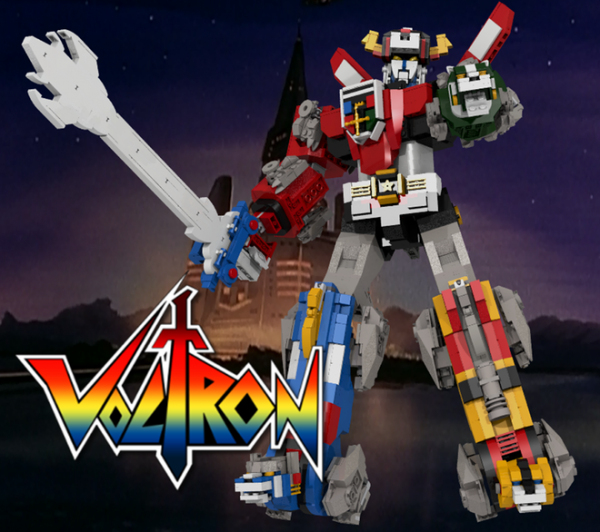 UPDATE (March 7, 2017): Since the results of the second 2016 LEGO Ideas Review Stage were already announced, with the Women of NASA by Maia Weinstock taking the lead as the next LEGO Ideas set to be produced, let’s take a closer look at the ‘wildcard’ of the batch. I wrote this piece almost a year ago when I first saw Lendy Tayag’s Voltron – Defender of the Universe over at LEGO Ideas, and I’m re-posting it here so we can have a better appreciation of this LEGO Ideas project whose fate will be sealed in May once the review panel makes their final decision. I know that the fire is still burning on this one, so let’s keep our fingers crossed brick fans!

Those who have read my previous posts on Moko’s awesome transforming LEGO brick, Joe Perez’ very excellent rendition of the Decepticon, Soundwave and LegoJalex’ Masters of the Universe LEGO brick built figures may have already guessed my particular affinity towards the classic 80s animation. Yes, I am a child of the 80s and I owe my geekhood to this great decade of classic cartoons, LEGO builds and cool music.

So when this build by len_d69 popped up over at LEGO Ideas, the first thing that entered my mind was, “Finally someone actually did it right.” Meet the original Voltron Force that started it all – now rendered in LEGO bricks in the most excellent way possible.

Voltron – Defender of the Universe is based on the Japanese anime Beast King GoLion. Under Toei Animation and World Events Productions, Voltron began to air in syndication in US televisions beginning September 10, 1984 until November 18, 1985. It lasted for two seasons with 75 episodes, and was highly praised for being the top-rated syndicated children’s show during its two-year original run. It was followed with a sequel bearing the same title but a different robotic build, and other reboot and spin-offs. But in my opinion, nothing beats the original.

len_d69’s take on the classic Voltron stays true to its function and form. Consisting of five lions named according to its color (which is based on the environment where they are kept), these lions are highly articulated and can transform and combine together to form the mighty and stunning Voltron robot. Even len_d69’s choice of colors for these mechanized lions is superb, and closely matches the hues and shades of the original Voltron robot as seen from the TV series.

The form and articulation of these lions are also exemplary. In terms of play value, these builds can either be formed separately to have a 5-strong lion pack headed by the Black Lion, or you can combine them altogether to form a 16-inch tall replica of the defender of Planet Arus. King Zarkon’s Robeasts doesn’t stand a chance once Voltron’s sword hits its mark.

Here’s a glimpse of Voltron from the 80s in case you’re not familiar with him.

Since its entry in LEGO Ideas last April 11, len_d69’s Voltron – Defender of the Universe already earned the support of more than 900 fans and was viewed more than 10,000 times.  Here’s len_d69’s description of this build.

When combined, they form Voltron which stands around 16 inches in height and weighs close to 1kg.

This is one LEGO Ideas set that surely won my support, and with Netflix and Dreamworks working together to bring this classic back to life with their reboot, Voltron – Legendary Defender, this is one LEGO Voltron that we’re sure hope to see on shelves in the very near future.