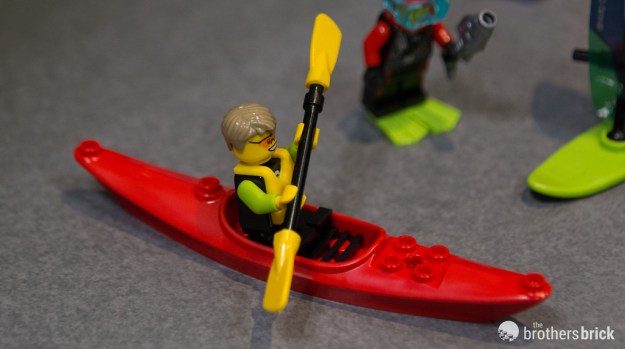 Undoubtedly you’ve noticed from our weekend posts that Toy Fair New York began on Saturday, and we were there in person to bring you coverage of LEGO’s latest news. This year I had the pleasure of attending as the representative from The Brothers Brick, tasked with the oh-so-onerous duties of getting a hands-on look at new LEGO sets months in advance of their release and bringing our readers photographs of them.

I arrived at New York’s JFK airport from TBB’s home offices in the Seattle area late Friday night, and made my way into the heart of Manhattan to my hotel. Saturday morning the 114th New York Toy Fair began at the Javits Convention Center, a large steel and glass structure near the water on Manhattan’s west side. Inside the Javits is a large LEGO model of the center on permanent display, designed by LEGO Certified Professional Sean Kenney.

At 7 AM, I entered the Javits, feeling a bit jet lagged but pumped to attend LEGO’s exclusive press event, which begins two hours before the show officially opens. The journalists invited to attend the LEGO event gathered in the atrium, waiting to be escorted into LEGO’s booth on the show floor. LEGO had giant brick sculptures of Batman and Ninjago’s Lloyd set up in the atrium to welcome attendees and provide a photo op.

The New York Toy Fair is not like a comic con or a LEGO convention. Like CES, where we got our first hands-on look at LEGO Boost, it’s a show designed for companies to attract wholesale buyers and for industry professionals to network. The toy fair is not open to the public, and everyone attending must be an exhibitor, buyer, or member of the press. However, that doesn’t mean it’s small: this year over 30,000 people attended and exhibitor booths sprawl over nearly 450,000 square feet. I walked 10 miles the first day, mostly on the show floor.

The majority of the show is made up of small, open booths a dozen feet in each dimension, and they look like what you’d see at a standard convention booth, except that no one is selling anything directly. All the attention is on wholesale marketing, so many exhibitors are listing wholesale prices along with the MSRP and taking large orders from verified buyers.

However, the big companies like LEGO, Playmobile, Hasbro, Mattel, and others all have enormous booths surrounded by 8-foot high walls and a staffed reception desk. Entrance is by appointment only, and you’ll be escorted around the booth by a sales rep.

That brings us back to the LEGO booth, which is one of the larger booths on the show floor. A near-life-sized brick-built Captain America greets visitors at the booth entrance.

Once inside LEGO’s booth, we were free to wander and take photographs for several hours until the show opens officially. The products are arranged in aisles and against the outer walls of the booth. Most of the sets are displayed with their boxes and a small card giving product info. It was a mad dash to take pictures of all the exciting new sets, many of which I was seeing for the first time.

There were a few themes on display we were asked not to photograph, including all the sets from The LEGO Ninjago Movie, Duplo Cars 3, and some Justice League sets. However, I can say I thought the Ninjago sets were absolutely awesome, particularly one that’s the second-largest Ninjago set ever.

Here’s what I got to see:

We’ve covered the sets in our theme roundups, but here are a few of my favorite small things that you may not have noticed in the larger set coverage (in no particular order).

1) Getting to see LEGO Boost in action. It’s super cool, and makes me think I could add robotics to my models, since EV3 seems a bit daunting to me.

The way the Blues-playing cat moves is incredible, and the mini-model assembly line is ingeniously fun. A simple programming change and the assembly robot builds the mini model with a different configuration.

3) The microscale luggabeast in the 2017 Star Wars Advent Calendar.

4) The M-OC Droid character from LEGO Star Wars: The Freemaker Adventures. The name is a nod to the common fan term for custom creations, MOC. He appears in 75185 The Tracker.

5) The new LEGO leopard/panther piece, which is just gorgeous. It’s in several of the new City Jungle sets.

6) The new carnivorous plant element and the new spider, which both appear in several of the City Jungle sets.

7) The new kayak and oars elements, which appear in City, City Jungle, and Friends sets.

8) Seeing 70917 The Ultimate Batmobile being constructed from its smaller sub-assembly vehicles.