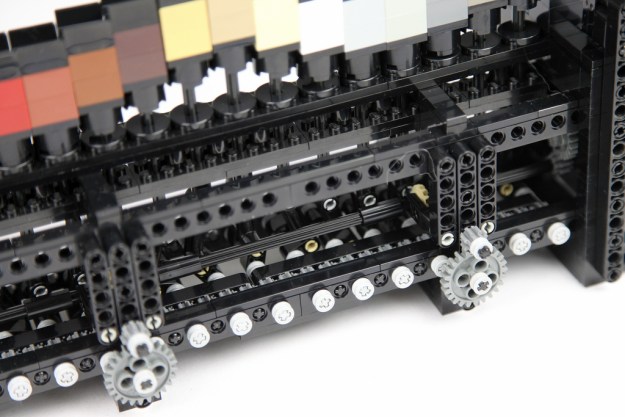 Berthil van Beek loves making some of the coolest LEGO machines around. Just a few week ago we highlighted his awesome LEGO ball maze that accelerates balls to 1,000 rpm, and he’s already back having spent more than 100 hours designing another breathtaking creation. This time, it’s an undulating wave of LEGO colors featuring 38 distinct swatches from LEGO’s palette (a palette that’s changing over the years).

Like Berthil’s ball maze, this mechanism is designed to fit with the Great Ball Contraption standard, fitting end-to-end with other fans’ creations for continual movement of LEGO’s tiny soccer balls and basketballs. Berthill tells us he was inspired to create the rainbow wave machine after seeing the vibrant rainbow of colors in the official image of LEGO’s Creator XXXL Box, which he also used a source for many of the colored bricks.

The Rainbow Wave Great Ball Contraption uses about 1,150 pieces and is powered by a single motor, with each of the colored pistons sitting on an 8-tooth gear. Each piston’s gear is exactly 1 tooth offset from its neighbors, and this means the balls travel in a perfectly level line as they move across the waving surface. Berthil says this mechanism took a lot of testing and redesigning to perfect, in particular because digital prototyping with LEGO rendering programs isn’t feasible for complicated moving machinery.