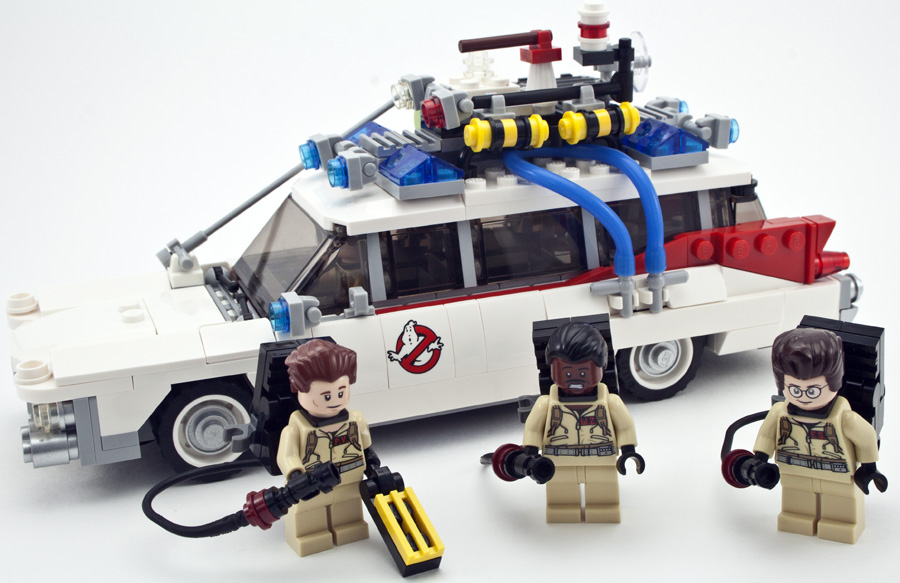 
The Ghostbusters Ecto 1 is the first of the newly branded ‘LEGO Ideas’ sets to be released. The original Cuusoo model was submitted by Brent Waller in March 2013 and quickly reached 10,000 supporters by August 2013. The LEGO Cuusoo team announced the sixth Cuusoo set would be the Ecto 1 in January 2014, and will be released on June 1st. The Ghostbusters HQ building was part of the original Cuusoo submission but not part of the released set, however Brent has made the instructions for building it available for download.

This is actually Brent’s second Cuusoo MOC to reach 10,000 supporters. In 2012 he submitted his Batman Tumbler (also on Rebrickable), however it did not make it past the review stage in favour of the yet to be released Exo Suit. Brent is currently the Environment Artist on a kickstarter funded real-time strategy game that looks amazing: Satellite Reign. Be sure to check out his demo of some of the rendering techniques he is using.

WARNING! You may NOT continue reading until you start playing this song in the background.

I prepared myself for this review with extensive research. I watched Ghostbusters 1 (I deny the existence of any sequel), a bunch of the animated series, then about 20 other Bill Murray movies (man, he gets around). I also spent a week trying to get that theme song out of my head, but eventually gave up. So good luck to you.

The box is similar to other Cuusoo and Architecture boxes in that it has a lid that can be closed, so no tearing is required to open it. Inside the box we have:

The book as is standard in this theme, contains information about the model and the designers. It also has quotes from each of the main characters spread throughout the pages.

There are 508 parts in this set, making it the largest Cuusoo set released so far.

Of course, we get the four Ghostbuster minifigs in this set: Bill, Dan, Harold, and the other guy. They each have new printed torsos, with their initials on the front, and their first name on the back. I think a couple of them have new hairpieces too. Unfortunately LEGO did not include the hairpiece that Brent used for his Peter Venkman, I think the recessed hairline would have looked awesome. As seems to be getting more common, they also have two printed faces.

It includes a small stand to help you showcase the minifigs. Since they are quite unbalanced with their large backpacks, they can’t stand up straight unless you position the cables so that it props them up, or use the built stand.

I love the details in the proton packs. For such a small item, they look great and I like the fact that the guns can actually be held by the minifigs.

There are no new molds, but several new printed parts (no stickers!). The 2×2 dish is fairly reusable, but the 2×2 bow parts and 1×2 tiles are quite specific to the Ghostbusters theme. But still, no stickers :) Now, I’m not much of a minifig collector but if the inventories are correct the 88646 4×3 plate is new in Light Bluish Gray. What makes no sense to me is that this part is completely covered up during the build and a fully studded part or parts would have been perfectly suitable instead.

There are a lot of flat silver parts – 38 not counting spares. It’s not quite the same as the chromed parts in Brent’s original Cuusoo model, but they still look great.

This model was fun to build. It has a very solid structure, and is surprisingly strong considering it has so many small parts hanging off it. There are a crazy amount of bracket parts used on all four sides of the car, which allow for some great SNOT building techniques. There are several layers built up on the side to give it its distinctive shape. Using brackets also helps keep it quite strong. The side windows are built sideways and clip into the car body quite securely. The roof of the car is loosely connected via four studs at the corners, making it easy to remove. The pneumatic tubing can also be pulled out easily. Unfortunately, only three minifigs can fit in the car – and then only by removing one of their neck brackets. I have no doubt this will be a popular set among AFOLs. It is definitely a step up from the previous Cuusoo BTTF set. As for its appeal to younger builders, I’m not sure. My kids have never heard of the Ghostbusters and weren’t very interested in this set. I take that as a personal failure on my part :(

Take a look at Brent’s Flickr page to see some comparisons between his original model and this LEGO Ideas set. His original was slightly larger and had plenty of chromed parts, but otherwise they are very similar.

Check out the rest of the photos taken during this review at my Bricksafe page.

This set is now available for sale for USD $49.99 via Amazon, eBay, LEGO Shop, or check the country specific links on the set’s details page.

So what do you think? Are you excited about this set?